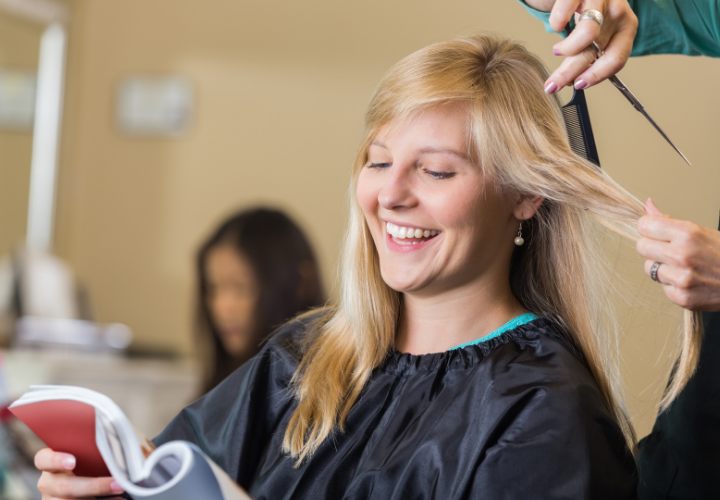 Page Boy - A page boy haircut is a typically shoulder-length or slightly shorter in back and on the sides. The style typically includes bangs on the forehead, is cut below the ears, and may include some layers, but only enough to ensure a clean simple style.

Purdey (Purdy) - A hairstyle made popular by actress Joanna Lumley in British televisions', 'The New Avengers'. The Purdey (Purdy) hairstyle is a blunt cut, almost bowl shaped, with a cut line that angles along the sides to the nape of the neck. The cut line of the style is slightly tapered to curve inward toward the head and give a smooth look to the finished style. It is also sometimes referred to as a Mop-top.

Shag - The shag haircut refers to a haircut with a lot of layers. Although a shag style can be of any length, they are typically shoulder-length at their longest and just below the ears at their shortest. Originating in the late 60s and early 70s, they are still popular today. The defining feature of a shag cut is layering achieved by elevating the hair to a stationary guide for cutting. The shag hairstyle has experienced a revival in popularity due to the cast of the American TV series, 'Friends'.

Traveling Guide - A traveling guide is one that moves with the area being cut. With a traveling guide, hair that has been previously cut is used to indicate the length of the next area to be cut. Haircuts like the basic circle cut and the pixie cut use a traveling guide. The result is layers with a uniform length.

Wedge - The wedge hairstyle was made popular in the 1970s by figure skater Dorothy Hamill. It has become a classic style with several variations over the intervening years but is defined by the sharp, clean tapering of the lower layers of the hair toward the nape of the neck. Typically, the style is worn with bangs and is at least mid-ear-length on the sides, but can be longer or shorter and still be considered a wedge, as long as the hair cleanly tapers in the 'wedge' shape at the bottom. It is similar in appearance to the 'Purdey' style listed above.

Graduated Hair or Graduated Haircut - The graduated haircut is a variant of the layered cut where the hair is cut into a specific angle or shape. The ends of the hair in this type of cut appear to "stack" on top of one another, often adding bulk or weight to the style in specific areas. Because of this, the graduated haircut is also known as a 'stacked haircut'. Often, bob-style haircuts are stacked to add interest and shape to accentuate the shape of the head or compliment a specific facial feature, or to elongate the neck.

Gamine Haircut - The term 'gamine' means 'mischeivous and playful', and has come to be used to denote the boyishly short and sassy hairstyles worn by many women. Among the women who are famous for their gamine styles are Halle Berry and Sharon Stone. Though not specific as to length, the gamine cut is invariably short (above the ears). It should be noted that 'gamine' doesn't indicate one specific haircut, but rather the general 'look' created by any of a number of different short-short hairstyles. The 'pixie cut' is a gamine hairstyle, and so are the shorter versions of the 'purdey' styles.

Gamine haircuts are best suited to slimmer women, with softer facial features. The style can often make those women with thin angular faces and features appear gaunt and disproportioned. It is sometimes suited to women with fuller figures and rounder faces for its ability to give the illusion of length to the face, but should be considered carefully before being chosen as the style requires a certain amount of attitude in the women who wear it.